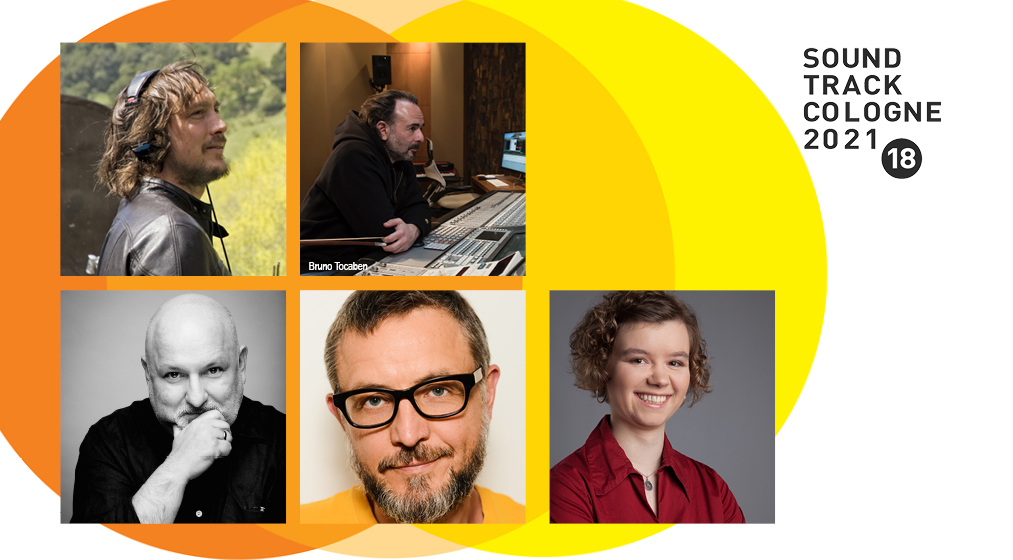 And the Oscar goes to: Nicolas Becker! The internationally renowned composer, sound designer and foley artist has already worked with great filmmakers such as Roman Polanski ("The Pianist"), Chris Nolan ("Batman Begins"), Guillermo Del Toro ("Hellboy 2"), Christophe Gans ("Silent Hill"), Andrea Arnold ("American Honey"), Denis Villeneuve ("Arrival") and Alfonso Cuarón ("Gravity"). His IMDb entry alone shows almost 270 credits as a foley artist or sound designer. For some years now, his work as a sound supervisor has also been gaining importance. His greatest success to date came this year with the music and sound design for Darius Marder's "Sound of Metal", for which he received an Academy Award and a BAFTA Award.
At SoundTrack_Cologne (STC) Becker will give exclusive insights into his work on "Sound of Metal" in a case study. In addition, CinePop will screen the award-winning film on Saturday, November 20 at Filmpalette Cologne. Tickets: cine-pop.de/

Nathaniel Méchaly is not only a film musician, but also a renowned composer for theatre music and contemporary dance. He wrote his first score in 2004 for "Avanim" by Raphael Nadjari, followed by Guy Ritchie's "Revolver" (2005) and Wong Kar-wai's "The Grandmaster" (2013), among others. He is the "go-to" composer for Luc Besson's production company "EuropaCorp" and composed for them the "Taken" trilogy, "Colombiana" (2011), "Angélique" (2013) and the series "Transporter" and "Taxi Brooklyn", among others.
The Frenchman has won five BMI Awards, among others. He also won the Best Original Film Score award at the 33rd Hong Kong Film Awards together with composer Shigeru Umebayashi and received the 8th Asian Film Award for "The Grandmaster". Méchaly will present his work in an interview at STC.

Ali N. Askin is a multi-talent: he composes, arranges, produces and moves between the most diverse genres: electronic music, hip hop, jazz tunes and club tracks are just as much a part of his range as orchestral scores. Already in the early 90s he gained international fame through his work as arranger and assistant for Frank Zappa & Ensemble Modern (for example "The Yellow Shark").
He has also been a successful film composer for German and international TV series and films for over 20 years. His IMDb entry counts a total of over 70 credits, including "Pettersson and Findus" three times, but also the documentary "The Green Wave" or the series "Türkisch für Anfänger". In 2008 he received the "Lola" for Best Film Score for "Leroy". His most recent scores include "Dogs of Berlin" and "Barbarians" (Netflix). Ali Askin will talk about his work on "Barbarians" in a case study on Saturday, November 20.

"Unorthodox" is one of the most successful Netflix series and has been awarded the German Television Award and the Primetime Emmy, among others. In addition, it was nominated in seven more categories  for the Primetime Emmy. Italian composer Antonio Gambale, who wrote the music for the acclaimed Studio Hamburg production, received  two of those nominations.
The Italian, who got his first job as a composer for a TV commercial at the age of 19, can look back on a successful 25-year career to date: He has worked with his colleague Philippe Rombi on films by François Ozon and with Pierre Adenot on "La Belle et La Bête (Beauty and the Beast)", among others. He scored the feature film "Joe Cinque's Consolation", which premiered at the Toronto International Film Festival. Gambale will shed light on his work on "Unorthodox" in a case study at SoundTrack_Cologne.

"Original, unconventional and mystical,” said the HARPA jury earlier this year. Flemming Nordkrog won this year's HARPA Award for his extraordinary score to "Shine your Eyes" and also received the Carl Prisen Award 2021. The Danish composer has written music for more than 25 feature films, numerous TV series, documentaries, TV movies and short films in Denmark, France, Belgium, Brazil and the USA. Recently, Nordkrog finished his work on the French feature film "Ogre" by Arnaud Malherbe, which will be presented at the Deauville Film Festival this year, and Philippe Lioret's "Sixteen". In total, he lists over 100 credits as a composer.
At STC he will present his work on "Shine your Eyes" in a case study. SEE THE SOUND will show the drama on Friday, November 19 at the Fritz Thyssen Foundation. Tickets: www.seethesound.de.

Susanne Hardt is a music theorist and (film) composer. She has a bachelor's degree in music theory, a master's degree in film music and is currently completing her doctorate. She is the graduate of the first year of the SoundTrack_Cologne Summer School for female film composers and was awarded a Special Mention at the STC's EUROPEAN TALENT COMPETITION 2018. Most recently, she received the Special Prize of the competition "Beethoven - Back to the Future" (2020). In addition to various contemporary pieces, she has written music for films, series and computer games - for example for the TV series "Ethno" (2020), commissioned by WDR, on which she collaborated with Nathalie Hausmann and Franziska Pohlmann. The three composers are part of the Female Composers Collective "Track 15". Susanne Hardt will shed light on her work on "Ethno" in a case study.

Tickets for SEE THE SOUND: www.seethesound.de

Please note: Admittance to the in-person SoundTrack_Cologne events will only be granted to fully vaccinated or recovered people. Additionally, participants have to show proof of a negative COVID Test (not older than 24h) ONCE. The test has to be in a form of a certificate from an official authorized test center. Antigen-self-tests will not be accepted. A PCR test is not required.