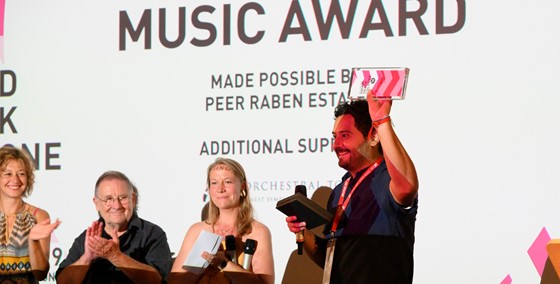 In 2021, SoundTrack_Cologne 18 will again present the PEER RABEN MUSIC AWARD for the best music in a short film and cordially invites film composers* and filmmakers* to submit their short films with their original compositions.

The award, first presented in 2009, commemorates the great German film composer Peer Raben, from whose estate the prize money of 1,500 euros is donated.

The award will be given to film scores with innovative and dramaturgically coherent use of music and sound in relation to narration.

The competition screening and the award gala will take place on November 20, 2021.

Short films can be submitted whose production was completed after 1 January 2020 or which were premiered after 1 January 2020. Films with a maximum length of 15 minutes in all industry standard formats will be considered. There are no restrictions regarding country of production, genre or content. However, the film must be predominantly with original music.

The nominees of the competition should be present at the screening of the films on Saturday, 12 June 2021 and will be presented to the audience and the jury. The award ceremony will take place during the official Gala on the same evening.

Juan Dussán is a composer for film and media based in New York. His short film "Mazel Tov" was nominated for the Ophir Awards (Israeli Oscars), while several of his other projects have screened at a dozen internationally renowned film festivals such as the British Film Academy Future Film Festival. Juanʼs film scores have been recorded with ensembles and orchestras from New York, Prague, Sydney, Vienna, and the Hollywood Studio Orchestra at the Newman Scoring Stage in Fox Studios, Los Angeles.

Paulo Gallo (1989) is a Chilean Guitarist, Composer and sound designer for Film, Dance and Advertising, graduated from Escuela Moderna de Música & Danza in Chile with further studies in chamber ensemble conducting, Based in Berlin.

He is 2 Times Nominated to Berlin Commercial on "use of sound and music" category (20/21), Finalist at MASA AWARDS 2021, in the category of Best composition for a short film, 2021 Winner of "Best Score for a feature film" with the film GRAN AVENIDA I (Dir. Moisés Sepúlveda) at FIC-VIÑA , and just now premiering his new score for the Ft. film suspense-thriller "IMMERSION" (2021) from upcoming director Nicolás Postiglione at Guadalajara International Film Festival. Recently, He scored and sound designed the shortfilm "TERRA CENE" (Dirs. Rodrigo Inada / Nono Ayuso) this year premiered in NOWNESS in alliance with the European Space Agency, based on the awareness of climate change, and the multi-nominated/awarded Dance shortfilm TOKE (2021) (dir. Nono Ayuso) Produced by The Jacob Jonas Dance Company in LA.

Thomas Höhl (*1987) is a composer for videogames and films.
After finishing a teacher training course at the university of Kassel with the school subjects Music and French he studied film scoring (Master of Music) with Cornelius Schwehr at the college of music in Freiburg.
He loves to make use of sound to breathe life into silent pictures and to contribute to the immersiveness of artificially created worlds. On every project, Thomas tries to fulfill the musical needs of the game or film even if that means breaking out of his own comfort zone. Thus, he loves to compose and experiment in different styles and with different approaches to music production: be it orchestral, hybrid, electronical…
He is experienced in writing linear music for real ensembles as well as writing adaptive scores with virtual instruments. Aside from that, Thomas transcribes and arranges music for orchestras, plays on stage as a pop/soul/jazz pianist and keyboardist with different bands and teaches improvisation, piano accompaniment and arranging at two music universities in Kassel.
Most recently, he has finished working on two interesting projects: He wrote an adaptive expressive score for the atmospheric indie platform adventure game „Minute of Islands“ and wrote some retro music for the biggest game convention that was held online to date „Dreamhack Beyond“.

Erica Procunier is an Emmy-nominated Canadian composer for film and other media. Her credits include scores for film, television, theatre, advertisement and interactive productions. She was commissioned by the Toronto Symphony Orchestra and Toronto International Film Festival to compose the score for DAM!

She recently scored the Apple TV+ Emmy winning series Ghostwriter, for which she received an Emmy nomination. She has scored the rowdy comedy series Little Dog, and the children’s series Detention Adventure for the CBC. Erica has worked on critically acclaimed films such as Pat Mills’ hit misfit comedy Don’t Talk to Irene starring Geena Davis and Thyrone Tommy’s anxiety-ridden drama Mariner, both official selections at the Toronto International Film Festival.

Erica was selected to attend Berlinale Talents 2019 and is an alumna composer of the Canadian Film Centre’s Slaight Family Music Lab. She currently teaches film scoring at Humber College. She is on the board of directors for the Screen Composers Guild of Canada and holds a Masters of Music Composition from Western University.

THE BIRTH OF VALERIE VENUS

Kevin Sargent is a multi-instrumentalist and composer for film and television, based in the UK.

He was nominated for a BAFTA for his score for the Emmy-winning drama 'The Hour' (Kudos/BBC) and an Ivor Novello Award for 'A Waste of Shame' (BBC).

Productions he has scored have won notable prizes including the Prix Europa Best Drama for 'We’ll Take Manhattan' and International Emmys for family films 'Katy' (CBBC), and 'Ratburger' (Sky/King Bert).

He recently had the honour of working closely with the late Ennio Morricone in Rome – rhythm-programming and remixing one of the maestro’s final projects.

Hélène Vogelsinger is a 31 years old french singer, composer and sound designer based in the south west of France.
After singing and composing music of different genres for various bands and projects for 10 years, she specialised two years ago in orchestration for film & TV (APC at Berklee), sound design for video games (PC at Berklee) and modular synthesis. She is presently working on three different films: « Le Poisson », a french short movie (Paris), « Place de Clichy », a french documentary on Paris (Paris), and « Somewhere »,an american film/musical (Los Angeles), that will be released in 2021/2022. Apart from composing music, she also records her own foley, to give a special and personalised touch to the films.
The relationship image/sound has always been of a great importance to her. In her modular synth project, she explores different places and connects with the environment to create unique and suspended moments. She released last year her debut album « Contemplation » on the german label Modularfied, which was quickly noticed by the international modular synth community. Her second album « Reminiscence » will be released on May 7th. Her pieces are a combination of evolutive patterns, ambient textures, voices, orchestral instruments and recording fields. Her creative universe is poetic, spiritual and soul searching

As DÜRBECK & DOHMEN we compose music for film & television, series, documentaries, theatre, commercials and games. Our work covers a lot of ground - from classical songwriting to electronic music - as well as orchestral and abstractexperimental film scores. Whatever project we're working on, we are always pursuing new ways and ideas to express ourselves. We often try and experiment with unusual and sometimes strange sounding instruments, creating new and unique sounds. That is the reason why we started to create our own instrument libraries CINEMATIQUE INSTRUMENTS (www.cinematique-instruments.com).

Inside our Cologne-based studios, we have been producing music for more than 70 motion pictures and TV shows since 2000.

Our muscial life began as teenagers, playing in bands. Over the course of 8 years we released 3 albums with EMI Germany. We played over 400 gigs in Germany, the Netherlands and the UK. After the band split up, we started our own company and studio, writing and producing music for films. Since then we have been writing scores for numerous films and documentaries.

Milena Fessmann is a music supervisor, moderator, producer and DJ.

Since 1991, Milena Fessmann has worked as a full-time DJ (2001-2014 Radio Eins After Work Lounge, Trompete/Berlin, European Film Awards 2015 etc.) and has worked for various radio stations. Since 1997 she works for Radio Eins/RBB and her own weekly show called "Free Falling".

In 1989 she founded CINESONG. She is moderator of several national events and panels such as the "Cartoon Movie Award"/Postdam 2002-2008, Reeperbahn-Festival 2014-21, c/o pop Cologne 2014-2021 and many more. Milena Fessmann teaches music supervising and copyright clearing at film schools such as DFFB Berlin and is advisory board member of the World Soundtrack Academy. She founded a film production company called Sugar Town Filmproduction Gmbh & Co.kg in 2011. The first project was "The Potential of Noise- Conny Plank" by Stephan Plank and Reto Caduff. She is executive-producer of "When Hitler stole Pink Rabbit", directed by award winning director Caroline Link and is co-producer on "Evaluation", "Girl made of Dust", Director: Hiam Abbass, “Prince of swans” and a few more.
Her newest documentary Project is called “ Jung kaput spart Altersheime”, directed by Christine Franz about female punk and new wave in german speaking territory from 1979-89 which is currently in pre-production.

Kadir founded his own production company, Filmfabrik, in 1995, where as director, writer and producer, as well as in cooperation with other renowned filmmakers, he made numerous television films, documentaries and feature films.

Kadir Sözen was born in 1964 in Turkey. He received a scholarship at the Hans Böckler Foundation, where he studied from 1986 until 1990, completing a degree in economics.

He founded his own production company, Filmfabrik, in 1995, where as director, writer and producer, as well as in cooperation with other renowned filmmakers, he made numerous television films, documentaries and feature films. Many of his film productions have been invited at international film festivals where they have received awards and prizes.  "Days of Our Wishes,” a two-part television movie, received the "Adolf Grimme Prize” in 2005. The German-Turkish co-production "Autum" received numerous nominations, including one for the European Film Award as well as for the Locarno Film Festival’s "CICAE Prix Art & Essai.”